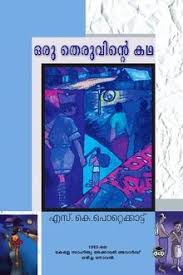 S. K. Pottekkatt, the most celebrated writer of the city. His award-winning work “Oru Theruvinte Katha”

Oru Theruvinte Katha (English: The Story of a Street) is a Malayalam novel written by S. K. Pottekkatt and published in 1960. It sketches a host of characters who spend their lives making a living in ‘The Street’. However the central character can be discerned as Krishnakuruppu, who is mostly addressed as 'Kuruppu', 'Paper Kuruppu' and even 'Vishamasthithi' due to his usage of the phrase 'Kaaryam Vishamasthithi' (Malayalam: കാര്യം വിഷമസ്ഥിതി) or 'situation is difficult' in English when calling out headlines while selling news papers. Some of the minor characters are introduced to the reader through Kuruppu, where he is shown to be in conversation about them with other prominent characters of the street.The street is based on the S.M. Street or popularly known as Mithai theruvu (Sweet Meat Street) in Kozhikode, Kerala. It won the Kerala Sahitya Academy Award of 1961.